How to use it during competitions?

How to use it when testing at home?

This rest of this page describes the remote start system in the same way as it could be described in the rules.
The start module is an open source and open hardware project.

Remote start and kill switch
Every round is started by the referee sending a start signal with an IR transmitter. As soon as the robot receives the signal the round will start. (This method makes the matches fairer since it eliminates false starts and is also time saving since less restarts is needed). The contestant can choose to either implement all the hardware and software by them self or he/she can simply use a prebuilt module (recommended).

Kill switch
The kill switch is used to cut power to the motors of the robot, which is used as a security precaution and is only mandatory in the 3kg class. When the referee sends the stop command the power to the motors has to be cut. The robot builder is responsible for adding such a kill switch on the robot by themselves, however the prebuilt module can supply the signal for activating the kill switch. Examples of recommended design can be found below.

Prebuilt module
The prebuilt module takes care of all communication and is very easy to implement. The robot only needs to wait for the start pin on the module to go high and then it should start. The module accepts supply voltage (VCC) 3.3-5V. The connectors have standard 2.54mm pitch.

Modes of operation
The figure below illustrates the modes of operation of the module. To be less sensitive to noise and disturbances the module will save its current state into a non-volatile memory and if it is resets it will return to the last known state. This means that each match will end with the referee sending the stop command. 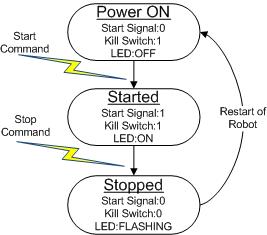 Note:  If the LED on the module is on before the referee has sent the start command it means that the module is in the “Started” state. Then the stop command has to be sent and the robot needs to restart for the module to go back to the “Power ON” state.

To be able to run multiple matches next to each other each dohyo will have its own unique identifier. The prebuilt module can be re-programmed to listen for a new identifier. This is done by the referee by sending a special programming command which updates this identifier.

Robots which use sensors that are based on IR technology with a 38kHz transmitter modulation are encouraged to start their sensors after the start signal is received. This is to minimize the risk of disturbance.

Explanation of use
Visit the link below where it is described how the system is intended to be used during competition, make sure to read it before the competiton.
http://www.startmodule.com/explanation-of-use/

How to test at home
http://www.startmodule.com/faq/home-mode/

FAQ
For answers to the most common questions regarding the start systems.
http://www.startmodule.com/faq/